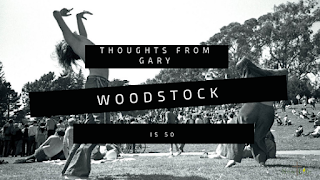 Well, here we are celebrating the 50-year anniversary of Woodstock.  Wow, man, how groovy is that?
Like far out! If you weren’t there digging the scene, man, you would think that it was like the most fab, really out of sight, man, happening ever. At least that is what all the specials and news write-ups are saying, but was it really?

I sadly watched many of my schoolmates and friends leave school on Friday as a normal student to
attend a concert, drink the “electric Cool Aid” and return on Monday as a new self-proclaimed hippie
acid head AKA a space cadet.  They said, “doing acid” was a new religion that promised an experience with “god”.

Things continued downhill as my generation was duped by people like Harvard drop-out professor
Timothy Leary. Leary grew his hair out and stuck flowers in it and donned a white robe to travel from
campus to campus inciting students to rebel while spouting his mantra “turn on, tune in and drop out”. (He actually looked ridiculous.)

Up to that time there had never been a generation in all the history of the world that had as much as
that generation yet rebelled against anything and everything; rejecting and throwing it away to do our
own thing. There are a lot of old “Woodstocker’s” that might disagree, saying “that was some
happening man!” as they glory in their Woodstock days.

But, is that living in realsville man? Only if you are still trippin’, can it be. No. The Woodstock’s and the whole 60’s hip scene was a bad trip that opened a Pandora’s Box of rebellion into America that also spread through much of the world and can never be closed without the Lord’s intervention. As one former Berkley hippie told me recently, “We just rebelled against anything our parents or their
generation valued. We didn’t know why, but if they were for it, we were against it.” So, they replaced
marriage with “free love”. Christianity was replaced with all sorts of Eastern religions that were
compatible with their newfound drug culture. And, disobedience, lawlessness and rebellion have
become the celebrated norms.

May 02, 2019
Today we are in a very real conflict of ideas, especially in the area where science and Biblical faith seem to collide. Although most adult Christians have already made up their minds by embracing the Bible as their ultimate source of truth, they can easily make the colossal mistake of assuming their children or their students will just naturally believe the way they do. In the past parents could say to their children, “That’s what the Bible says.” And that would be enough to settle the question. And since the educational system and the culture still had a respect for the Bible, kids would accept that without too much question. Today is very different considering what is being taught in our schools, and a statement like that will at some time or another come across as narrow and dogmatic to children. With this in mind parents need to be aware that they must be far more diligent in teaching their children Biblical creationism. We need to educate ourselves too, for if we are not abl…
Post a Comment
Read more