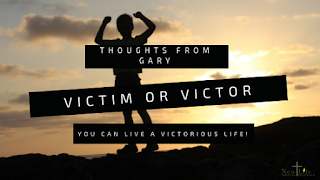 Something of great virtue has been lost in America and we’ve hardly noticed. “What?” you might ask. It is the collective strength of the individual. Americans have always been known for their courage, and their independence, both individually and nationally.  This very trait is even celebrated in our national anthem: “O say, does that Star - Spangled Banner yet wave, O'er the land of the free and the home of the brave.”  Sadly, we are losing that fortitude of mind and instead are rapidly becoming a land of victims.
This happened to the French in-between WW1 and WW2 as intellectuals began to teach school children to focus on the victims of WW1 instead of celebrating their father’s courageous stand against the Germany’s invasion of their country for 6 long years. Due to the programming of their minds, the WW2 generation had lost their fortitude and instead they took on a victim mentality. As a result of this new kind of thinking of this generation was that within two decades they were invaded by and taken over by Germany in 6 weeks without hardly firing a shot, even though they far out armed the Germans! Had they stopped Germany at their border there may never have been a WW2 with all its horrible carnage and destruction.
What an important lesson this is for both the individual and our entire nation. If one will notice, evidence of this shift from hero to victim has been taking place in our own beloved America with an increasing focus on the victim and on villainizing of our heroes. This has become a common theme in our literature, movies and even our history books which are constantly being revised by the historical revisionist.
Compare, for example, the theme of movies in earlier years to those of contemporary times. The early movies celebrated courageous Americans who overcame the harsh and the terrible odds that were often against them. Heroes like Abraham Lincoln, Daniel Boone, and Sgt. York of WW1 fame and other brave pioneers, cowboys and lawmen were all represented. They were shown as those who braved and sacrificed against untold hardships and personal peril that other nations, nature, bad men, outlaws and hostile Indians dealt them. Courageous and good men were celebrated and cowards and wicked men were treated with contempt.  Military heroes, political heroes and folk heroes and even technological and industrial heroes like the Wright Brothers, Henry Ford, and Thomas Edison were greatly honored.  They were some of the many faces who strengthened our nation.
We celebrated and revered not the perfect person, but the courageous individual. We were a nation of “Git ‘er Done” and overcomers; self-reliant men and women that triumphed over some of the most terrible hardships anyone could ever endure. Men who would fight to the last man then “sell their lives dearly” to the enemy. Our heroes were the underdogs who rose up against all odds and became victorious. They suffered hugely but wore their scars as medals of honor - never thinking of themselves as victims.
Today’s America is much different; many have lost that strength of mind and character and have substituted a “poor me” mentality to the point where some have become “card carrying” victims.  Surely, we must have compassion on those who have greatly suffered in life but taking on a victim mindset can be extremely detrimental and ruinous to one’s present and future.  A victim mindset allows someone’s actions, often going back many years to childhood, to have great power over your life. I certainly do not mean to belittle the effects of the wounds, ridicule, abuse or horrors experienced or suggest that it is wrong to seek help as needed.  Yet, there comes a time in all of our lives when we must make the difficult decision. Whether we chose to live our lives as a victim or a victor is a decision we all must make for it will certainly affect us and others for the rest of our lives.
Being a victor means we have not allowed anything, any situation or anyone to overcome us, but don’t be confused! It does NOT come without lost battles, failures, pain, defeats, discouragements, and even feelings of depression at times. No, for us to be victors means we must be brave and fight our battles knowing there will be pain, wounds and scarring.

The questions I encourage anyone who has been wronged or hurt to ask themselves are:
How many years have I suffered?
How many years has this affected me?
How many years will I allow it to affect me?
The question I ask you is; Are you ready to forgive and move ahead or do you want to stay locked in the past? Jesus came for every victim, but not for the purpose of allowing us to stay a victim.
No! He came to make us victors in Him as the hymn states, “O victory in Jesus, My Savior, forever. He sought me and bought me, With His redeeming blood; He loved me ere I knew Him, and all my love is due Him, He plunged me to victory, Beneath the cleansing flood.” Or as Joshua 1:9 commands, "Have I not commanded you? Be strong and courageous! Do not tremble or be dismayed, for the LORD your God is with you wherever you go."
If you are struggling with defeat as many are then I suggest you read more words from the scripture to encourage you. I also recommend some biographies and autobiographies of people who suffered, but overcame.  For young people the “Little House Series” by Laura Ingles Wilder are great or The Boys Of ’76 by Coffin tells of the struggle of the Revolution.  Other historical pioneer accounts such as The Trans-Alleghany Manuscripts by Lyman Copeland Draper give a firsthand account of the westward pioneers’ struggles. King David, St. Paul, Abraham Lincoln, Helen Keller, Jackie Robinson, Joyce Meyer-there are so many examples that will encourage you!
In closing I would like to share a quote from my wife Michelle’s grandmother, Delores Owens. “It’s a great life - if one doesn’t weaken.”

May 02, 2019
Today we are in a very real conflict of ideas, especially in the area where science and Biblical faith seem to collide. Although most adult Christians have already made up their minds by embracing the Bible as their ultimate source of truth, they can easily make the colossal mistake of assuming their children or their students will just naturally believe the way they do. In the past parents could say to their children, “That’s what the Bible says.” And that would be enough to settle the question. And since the educational system and the culture still had a respect for the Bible, kids would accept that without too much question. Today is very different considering what is being taught in our schools, and a statement like that will at some time or another come across as narrow and dogmatic to children. With this in mind parents need to be aware that they must be far more diligent in teaching their children Biblical creationism. We need to educate ourselves too, for if we are not abl…
Post a Comment
Read more

September 06, 2019
Well, here we are celebrating the 50-year anniversary of Woodstock.  Wow, man, how groovy is that?
Like far out! If you weren’t there digging the scene, man, you would think that it was like the most fab, really out of sight, man, happening ever. At least that is what all the specials and news write-ups are saying, but was it really?

I sadly watched many of my schoolmates and friends leave school on Friday as a normal student to
attend a concert, drin…
Post a Comment
Read more