Though the evidence of Secular Humanism can be found everywhere in our culture few individuals seem to be able to define it or identify its pernicious presence. Many do not recognize that Secular Humanism has become America’s new religion; for this very reason we must learn what it is and how it is affecting us. We need to seek answers to these questions: What is it? What does it teach? Where is it at work in our society today?

First let us define it: (I have taken the liberty to copy this brief definition from a commentary of the late Bible scholar Dr. Donald C. Stamps.)
“Secular humanism teaches that humanity, the universe and all that exists consist only of matter and energy shaped into their present form by impersonal chance. It teaches that humans have not been created by a personal God, but are the product of a chance process of evolution. It rejects belief in a personal, infinite God and denies that the Bible is God’s inspired revelation to the human race (atheism). It asserts that knowledge does not exist apart from human discovery and that human reason determines the appropriate ethics of society, thus making human beings the ultimate authority, (situation ethics). It seeks to modify or improve human behavior through education, economic redistribution, modern psychology or human wisdom. It teaches that moral standards are not absolute but relative, determined by what makes people happy, brings them pleasure, or seems good for society according to the goals set by its leaders; Biblical values and morality are rejected. It considers human self-fulfillment, satisfaction and pleasure to be the highest good in life. It maintains that people should learn to cope with death and the difficulties in life without belief in or dependence on God.”
“The philosophy of humanism began with satan and is an expression of satan’s lie that humans can be like God. (Genesis 3:5) Scripture identifies humanists as those who have exchanged the truth of God for a lie, and worshiped and served the created things rather than the Creator.” (Romans 1:25)
Secular humanism is not only a worldly philosophy, but it is actually a religion as described in the humanists’ own manifesto. It is a wicked twin sister to communism and socialism, as they share very similar core values. It has been used successfully to eradicate Christ from the public schools and other American institutions.
Have you noticed the war going on to wipe out anything that is a part of the Christian/Judeo religion from our public places? Such things as Scripture plaques, crosses, manger scenes, to the removal of prayer and the Bible from our schools, to any reference to God in public places, and now, the closing of churches!
Humanism also cries out for “separation of church and state”. Meaning the Christian religion is no longer welcome in government but our new religion of humanism is! Incidentally this clause is not found in the U.S. Constitution but is found in the former Soviet constitution!
Secular Humanism is not something that is coming in the future; it is something that is here right now and has been active for decades already. The reason many do not recognize secular humanism is because they have been steeped in it for at least 13 or more years of their life while they were in the educational system. As stated in the definition above, it is the religion of much of our government, modern psychology, science, and the entertainment and news media.
Most importantly we must recognize that it is the antithesis of Christianity, Judaism, and the Bible. It is blatantly an anti-Christ religion. Once we begin to recognize it we hear the voice of secular humanism everywhere in our culture. “Trust the science.” “We must redistribute the wealth.” “If it feels good, do it.” “Make up your own rules.” “Do it! You only live once.” “Whose truth, yours or mine?” “There is no truth.” “Save the planet!” “Government will take care of you.”
As followers of Christ, we should be good stewards of our planet, science certainly has a wonderful role in improving our lives, we should be generous in giving and enjoy life along the way; but we must also be able to discern between what is sound Biblical teaching and what are the lies of the ungodly.
One of the primary goals of Secular Humanism, besides destroying the intrinsic knowledge of the existence of God found in all children, is to turn us into collective wards of the state. To do so, they must destroy Faith and the liberties as described in the preamble of the Declaration of Independence. “We hold these truths to be self-evident, that all men are created equal, that they are endowed by their Creator with certain unalienable Rights that among these are Life, Liberty and the pursuit of Happiness.”
Secular humanism is the carbon-copy opposite! It declares that the state – which is made up of various humans, is the ultimate authority and gives us our rights. Accountability comes only from other men. This makes authority available to whoever has the most power and when men become gods the result is a very precarious and dangerous government indeed!
Our founding fathers very clearly founded our American government on the belief and recognition that it is God the Creator who gives us our rights, inalienable rights at that, and all men are accountable to Him!
(Inalienable rights definition: “Personal rights held by an individual which are not bestowed by law, custom, or belief, and which cannot be taken or given away, or transferred to another person, are referred to as ‘inalienable rights’. The U.S. Constitution recognized that certain universal rights cannot be taken away by legislation, as they are beyond the control of a government, being naturally given to every individual at birth, and that these rights are retained throughout life.”)
“See to it that no one takes you captive through philosophy and empty deception, which are based on human tradition and the spiritual forces of the world rather than on Christ.” Colossians 2:8
We are warned not to be deceived by the philosophies of this world and the evil spirits behind them. Always bear in mind that secular humanism and communism are waiting to take you captive, so keep your eyes wide open!
God bless,
Pastor Gary Smith 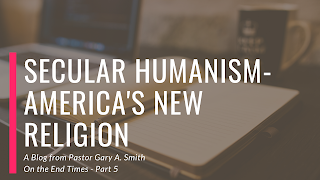