THE RAPTURE OF THE CHURCH AND ORDER OF EVENTS

As was stated in the first blog this is only a “bare bones” look. It is not meant to cover every facet and every detail, my purpose is to help us get a better understanding of the series of events that will take place and the order we can expect them to come in. Since some events leave some ambiguity as to details and timing, I ask for grace from my readers. I think the most important thing is that each individual searches their heart and the Bible truths to determine whether their soul and heart is prepared for Jesus Christ’s rapturing of His unspotted Bride. We each must be ready for Him or we will be left behind! 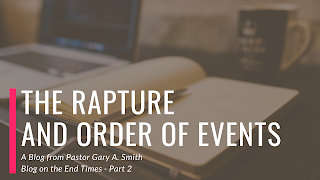