THE RAPTURE OF THE CHURCH

September 23, 2020
This is the 3rd article on the End Time, let’s begin by going back to look at the Rapture in more detail.
“For the Lord Himself will descend from heaven with a shout, with the voice of the archangel and with the trumpet of God, and the dead in Christ will rise first. Then we who are alive and remain will be caught up together with them in the clouds to meet the Lord in the air, and so we shall always be with the Lord.” 1 Thessalonians 4:16-17
The word rapture comes from the Latin word raptu, which means “caught up” or “caught away”. This is when Jesus “catches up” His Bride from the world to be with Him. It is a scriptural event and will happen; however, when it will happen has been the source of great confusion within the Church for many years. Perhaps you have heard people teac 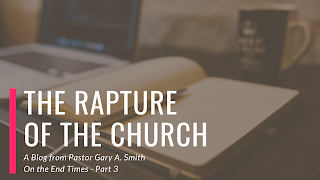 h that there will be a Pre-Trib (tribulation) Rapture, or a Mid-Trib, Post-Trib or even a Pan Rapture. There is lots of confusion!
In brief:
• Pre-Trib is believing that Jesus comes for His Bride before the Tribulation (the Anti-Christ’s reign).
• Mid-Trib is believing Jesus comes for His Bride after the first 3 ½ years of the Tribulation.
• Post-Trib is believing Jesus comes for the whole Church at the end of the 7 year Tribulation.
• The Pan Rapture is a silly term for those who don’t have a clue and say they will wait and see whatever “pans out”!
For me personally, one of the greatest causes for uncertainty on the timing of the Rapture was that I confused it with the Second Coming of Christ.
The Rapture, as the late Dr. Donald Stamps wrote, is the first phase of His coming”. Phase two, is when He comes at the end of the second 3 ½ year period of the Tribulation (the end of the seven years) with the previously raptured saints (Christians), to take back the world and establish His Kingdom on earth.
If we view His coming as only one event, as many have taught, there will be confusion.
I now believe the Pre-Tribulation is the timing for the rapture of part of Christ’s Church when He will save the truly faithful from the wrath to come. During the Tribulation the wrath of satan will be poured out on the inhabitants of the earth such as to bring the worst sufferings ever known to mankind! During this time when the faithful portion of the Church have been raptured they will each stand before the Judgement Seat of Jesus Christ in all of His Glory. Those raptured will give an account to Him of what they have said and what they have done while in the body on earth. There will be rewards given and rewards lost at this time. 2 Corinthians 5:10
As we look at the Word of God concerning this, it is likely that many are wondering if they will be raptured by Jesus or will be left behind to go through the “trial by fire” of the Tribulation for refinement. Most believers think they will be raptured at some point, but the Words of Jesus makes it very clear that not all will be ready when He comes, and that He will come at a time when least expected. In other words there will be no “tell-tale” signs of His coming.
Matthew 24:40-41 states that “one will be taken and one will be left”. The parable of the 10 Virgins in Matthew 25:1-13 shows clearly that about half the Church will have run out of oil for their lamps and will not be allowed into the wedding. “Later the others also came. ‘Lord, Lord,’ they said, ‘open the door for us!’ “But he replied, ‘Truly I tell you, I don’t know you.’ “Therefore keep watch, because you do not know the day or the hour.” Because they had once been filled with the oil of the Holy Spirit but were foolish and let their lights go out, the door was closed to them.
Let’s look at Matthew 24:42-51. This parable is similar in that it warns us to be READY for His coming! In this case a Christian backslid and began to live a careless life, a life that was not in obedience to God. They began to behave in worldly ways and justified it by thinking the lord wasn’t coming back anytime soon and they had lots of time to repent and get their life straighten up. Alas! But the master returned when he did not expect Him! This is what happened to him: “He will cut him to pieces and assign him a place with the hypocrites, where there will be weeping and gnashing of teeth.”
Do you know that God despises hypocrites? A hypocrite is someone who presents themselves in two (or more) ways. When around the pastor or other Christians they present themselves as a good solid disciple of Jesus Christ. They watch their language and they present a convincing “show”. However, when they are around their non-Christian acquaintances they throw off their “religious” mask and act and talk just like them. Chameleons. Spiritual people can see right through their charade and grieve over their state, as does the Lord!
There will be NO hypocrites allowed in the Kingdom of God! There will be former hypocrites and former everything else. Only when we repent and surrender our life to Christ, and stay close to Him and His church can we have the assurance of being raptured!
More to follow!
// Pastor Gary A Smith