THE APOSTASY and THE SECRET POWER OF LAWLESSNESS

This is the 4th article in my End Time series. The Apostle Paul wrote these words of scripture to the church in Thessalonica. “Concerning the coming of our Lord Jesus Christ and our being gathered to him, we ask you, brothers and sisters, not to become easily unsettled or alarmed by the teaching allegedly from us—whether by a prophecy or by word of mouth or by letter—asserting that the day of the Lord has already come. Don’t let anyone deceive you in any way, for that day will not come until the rebellion occurs and the man of lawlessness is revealed, the man doomed to destruction. He will oppose and will exalt himself over everything that is called God or is worshiped, so that he sets himself up in God’s temple, proclaiming himself to be God.”

“Don’t you remember that when I was with you I used to tell you these things? And now you know what is holding him back, so that he may be revealed at the proper time. For the secret power of lawlessness is already at work; but the one who now holds it back will continue to do so till he is taken out of the way. And then the lawless one will be revealed whom the Lord Jesus will overthrow with the breath of his mouth and destroy by the splendor of His coming. The coming of the lawless one will be in accordance with how Satan works. He will use all sorts of displays of power through signs and wonders that serve the lie, and all the ways that wickedness deceives those who are perishing. They perish because they refused to love the truth and so be saved. For this reason God sends them a powerful delusion so that they will believe the lie and so that all will be condemned who have not believed the truth but have delighted in wickedness.” 2 Thessalonians 2:1-12
Paul wrote these words when he learned that the church was confused due to false teachers and false prophets who were telling them that they had missed the coming of the Lord. Paul assures them they hadn’t, and admonishes them not to be fooled. He goes on to reiterate to them some of the signs of Jesus’ coming; notably the rebellion. It is also called the apostasy, which means to fall away from the truth. There are two distinct manifestations of this: One, is the denial of the inerrancy of God’s Word which leads to false doctrine – the doctrines of men and demons. The other, is falling away from the Christian Faith, including fellowship and attendance in the local church! Can you see this happening around you? Over the years I have seen many people who came to Christ and were faithful, who eventually quit attending church - any church. This has, unfortunately, become common! I have always wondered how these same folks who have forsaken the gathering of believers in their local churches can hold to any hope that someday they will be allowed in heaven or at least receiving a heavenly reward. After all, if they choose not to be with Jesus’ people on earth why would Jesus allow them to enter heaven where the same people from the local churches they rejected will be? The Church is Christ’s Body whom He loves, don’t fall away from It!
Paul also mentioned “the secret power of lawlessness”. This power has been at work here on earth through the ages but is intensifying as we approach the reign of the Anti-Christ. It can be clearly seen in the underlying corruption, intrigue, oppression, manipulation, conspiracies, immoralities and all other things that are against the decency and the Law of God. It begins to operate first under the surface of society but later emerge when it begins to gain acceptance by the world elites and as society becomes more “tolerant” of their “progressive” views and mandates. It goes hand-in-hand with the Great Apostasy and rebellion against God. It will continue to become more emboldened and obvious as we move along in the End Time period.
Today we recognize it as the spirit of Secular Humanism/Marxism/Communism/Socialism that has infiltrated all of our institutions. For instance Secular Humanism became the religion of our school system through the likes of atheist John Dewey, a signer of the Humanist Manifesto, and a great admirer of the Communist Bolsheviks. This power of lawlessness has become very obvious in all the many facets of the media - from music lyrics, Hollywood movies, and the news media, etc. and even churches. As we are exposed to these various outlets we can easily detect an underlying slant and intolerance against traditional values, decency, morality, opposing political views and as mentioned, Christianity along with Judaism. The last thing Paul warns is that the people who do not love the truth will be given over by God to believe lies and to be condemned. Would you agree that this is certainly a time to get serious with God?
To be continued...
// Pastor Gary Smith 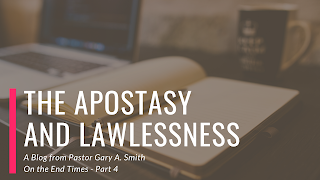